Józef Modelski was born on 25 March 1949 in Kawnice (wielkopolskie region). 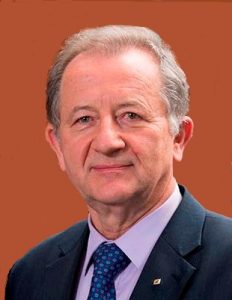 In 1967 he graduated from the secondary school in Konin, having been the winner of nationwide chemistry and physics contests. He received his M.Sc. degree in electronics (specialization: radio engineering) in 1973 at the Faculty of Electronics of Warsaw University of Technology (WUT). The Faculty Council has also granted him the degrees: Ph.D. (1978), based on the dissertation: Method of Designing a Microwave Analogue Phase Shifter in a Set Frequency Band (with distinction), and the D.Sc. (1987) for the monograph: Microwave Analogue Modulators and Phase Shifters. In 1994 he received the state title of Professor.

Since 1973 Józef Modelski has been employed at the Institute of Radioelectronics of Warsaw University of Technology, holding in sequence all academic positions from teaching/research assistant to tenured professor (1991). In 1976-77 he spent 13 months in the US as a Fulbright grantee working with the microwave laboratories at the University of Texas at Austin, Cornell University (Ithaca) and Communication Satellite Corporation COMSAT (Clarksburg). In 1985 he spent 6 months in Germany as a DAAD grantee. He has been on numerous research internships to European telecommunications firms and universities in inter alia: UK, Italy, Belgium, Portugal and Germany. In 1986 he joined for 2 years the Braunschweig Technical University (Germany) as a senior scientist and visiting professor.

J.Modelski’s research interests focus on microwave techniques, radiocommunications and television. In the early 70’s he participated in the creation of methods and equipment for measuring microwave semiconductor diodes parameters. Thereafter, for over ten years he dealt with the design and construction of microwave modulators and phase shifters used in telecommunication systems – at first devices with semiconductor diodes, and in the 80’s also devices with MESFET transistors and ferrite elements. During his stay at the Braunschweig Technical University he was involved in researching the design of microwave subsystems in the technology of integrated waveguides INWATE and he was one of the coordinators of the research project focused on working out the prototype of a satellite converter for the German telecommunications industry. In the years 1983-94 he conducted research on the design of accurate methods for analyzing dielectric and ferrite resonators as well as applying these resonators in filters, generators and material properties measurements in microwave band. In recent years his research interests have mainly focused on ferroelectric and smart antennas. J. Modelski has managed several major research projects conducted for national entities, inter alia: designing the concept and conditions for the implementation of GSM-R System for the Polish Railways (1997-2001).

He is the author and co-author of over 300 publications, 9 patents and 4 monographs, inter alia: Microwave Modulators and Phase Shifters with Semiconductor Diodes (WNT, 1984), Dielectric Resonators and their Applications (PWN, 1990). His major original achievements implemented in practice include: the microwave integrated phase modulator used in the transmitter of the INTELSAT satellite (USA, 1978) and the TV converter integrated circuit in the INWATE technology for French-German satellite – Kopernikus (implemented for mass production, Germany, 1988). Within the last few years he has initiated and co-organized a fair number of international programmes.  His research team was involved in 10 European projects, inter alia: 3 EU specific targeted research projects: Reconfigurable Systems for Mobile Local Communication and Positioning RESOLUTION, Core Subsystem for Delivery of Multi-Band Data in CATV CODMUCA and Integrated Mobile System for Supporting Anti-terrorist and Crisis Management Operations PROTEUS;  integrated EU project: Co-operative Systems for Road Safety “ Smart Vehicles on Smart Roads” SAFESPOT; 2 EU networks of excellence: Antenna Centre of Excellence ACE2 and Top Amplifier Research Groups in a European Team TARGET.  For his research achievements he has received 6 Awards of the Ministry of Science and Higher Education (1979, 1981, 1989, 1985, 1991, 1995) and the Award of the Technical Sciences Division of the Polish Academy of Sciences (1988).  His team was also the winner of the European Microwave Association Award for the best paper of the European Microwave Conference 2008 in Amsterdam.

J.Modelski has lectured the following courses: Electromagnetic Field Theory (1979-89), Microwave Techniques (1978-81), Contemporary Applications of Microwaves (1983-97), Satellite Television (1988-99), Cable Television (1989-98), Antenna Analysis and Design (1995-2001). Satellite Communications (1997-). He is the co-author of the textbook: Selection of Problems on the Electromagnetic Field Theory (WNT, 1990) as well as two textbooks for laboratories: Measurements of Antennas Characteristics and Basics of Radiocommunications. In the 90’s he coordinated two European educational programs: TEMPUS: JEP-2038 The Use of Computers in Electrical Engineering Education (1991-94) and JEP-7403: Modern Technologies in Telecommunications for New Polish Educational Systems (1994-97). At that time, he also initiated and co-established several new laboratories for television, antennas and radiocommunications at the Institute of Radioelectronics, WUT. He has also started up a new specialization at the regular studies – Radiocommunications and Multimedia Techniques, initiated evening and continuing education studies of Radiocommunications specialization as well as launched specialist courses within the framework of Radiocommunications Study, Multimedia Techniques and Biomedical Engineering- RADEM,for in-company trainings.
In the years 2014-2016 he was a leader of the Educational Project International Master’s Degree in multiMEDIA – Technology, Design, Management, granted by Foundation for the Development of the Education System (Norway Grants). He has been supervisor of over 100 B.Sc. and M.Sc. theses, as well as 24 Ph.D. dissertations. For the didactic achievements he has received numerous distinctions, including the Medal of National Education (2003) and 4 Awards of the Ministry of Science and Higher Education (1975, 1983, 1991, 1999).

In the years 1980-85  J. Modelski acted as proxy for the Rector of WUT and Chair of the Rector’s Committee on Foreign Internships for Students;, in 1994-96 he was Head of the specialization Radiofrequency Engineering at the Faculty of Electronics and Information Technologies; WUT, in 1998-2007 he was a member of the Rector’s Committee for the University Development and Modernization. In the years 1988-2000 he headed the Television Division and in 2003-2010  headed the Radiocommunications Divison at the Faculty of Electronics and Information Technologies. In the years 1996-2016 he held the position of the Director of the Institute of Radioelectronics at WUT. In the years 2006-2013 he was a Chair of the Council of Academic Sports Association at WUT. Since 2016 he is Head of the Radiocommunications Divison at the Institute of Radioelectronics and Multimedia Technologies. He is Founder and President of the Foundation for the Development of Radiocommunications and Multimedia Technologies (1999-).

Modelski has been awarded inter alia:, the Cavalier’s Cross of the Order of the Restoration of Poland, the Medal of National Education, the Golden Cross of Merits, the Silver Medal of the Senate of the Republic of Poland, the Minister of Communication Distinction, IEEE Third Millenium Medal, IEEE MTT-S Walter Cox Award, IEEE MTT-S Distinguished Service Award (2013), European Microwave Association Distinguished Service Award (2015), 10 Awards of the Ministry of Science and Higher Education, the Medal of 80th Anniversary of Polish Broadcasting. In 2015 he was awarded with the entry in the Graduates’ Golden Book of WUT. He has been awarded two Doctor Honoris Causa degrees: from the Military University of Technology and from the Lodz University of Technology.

He is married, has three children and three grandchildren. His interests include classical opera and medieval history; he enjoys skiing, gardening and playing bridge.