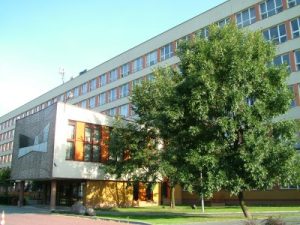 The Institute of Radioelectronics was founded in 1970 after merging five departments with significantly varying professional profiles: Department of Radiotechnical and Television Devices, Departmentof Radiolocation, Department of Electroacoustic, Department of Radiology and Department of Construction of Electromedical Devices. Finding the common topics for the academic activities for all these departments was difficult. Therefore the Institute was given a general name, which suggested the electronics domain as the main research interest. On the other hand, the name was intended to expose the frequency-based  approaches during the scientific investigations: acoustic vibrations, radio waves, or nuclear radiation.

The name remained unchanged since the beginning, despite such changes being made for the Faculty and all other institutes, considering the evolution of both their structures and the electronics and information technologies domains in the world. Similar premises were the basis of the application for the change of the Institute of Radioelectronics name in 2015. On one side, the importance of the multimedia technologies in the Institute activities significantly increased. On the other, the multimedia gained a worldwide acceptance in the world, leading to the increase of the demand for the corresponding educational and research services.